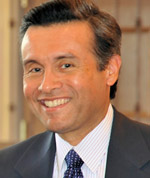 Louie has been with Ivy Tech Community College for 25 years. Prior to this, he worked at Calumet College of St. Joseph and Indiana University Northwest.

As Chancellor of Ivy Tech's Lake County campus, Louie has led the campus through a period of tremendous growth in enrollment, community outreach and fundraising. Since 2006, when Louie took on the role of Vice Chancellor/Dean, enrollment has soared from 850 students to over 2,100 students, many who are first generation college students.

Louie has been instrumental in the development of programs and services that extend beyond the academic needs of students and is focused on their success in college and in life. Included is the recent development of the East Chicago Back-to-Work Program, guided by Rev. Darnell Johnson, director of the Holistic Community Coalition. This program provides intensive training sessions in the fields of carpentry and general construction. It is designed to put East Chicago residents to work with building contractors who are refurbishing and erecting homes in East Chicago neighborhoods.

Other areas where he has served the community are as:

With all this, Louie still dreams of his number one goal to become the most interesting man in the world. But more important to him than that is his dream of being present at Wrigley Field when the Cubs win the World Series. Understanding the poor likelihood of achieving either of these ambitions, Louie hopes that one day he can at least finally convince his students NOT to Tweet their innermost thoughts and personal critiques of their instructors.