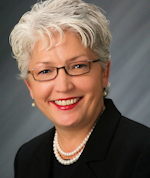 Martie, who has held her current position for 12 years, began her career with Bank Calumet (now known as First Midwest Bank) 19 years ago, managing several offices. Prior to this, she lived and worked in Denver, Colorado. Martie has 39 years of banking experience, ranging from lending (both consumer and mortgage) to retail banking. In 2000, she completed the Graduate School of Retail Banking, a two year program of continuing education for retail banking management. Martie is the district leader for First Midwest Bank's CRA efforts and is active in their Hispanic outreach efforts.

Martie serves in various capacities throughout the community. She is on the Board of the Legacy Foundation and serves as the chair of their grant committee. Through Legacy, she also serves on the Lilly Scholarship review committee and the College Readiness Fund committee. She is also on the Board of the Munster Chamber of Commerce and is on the Volunteer Advisory Council with the Lake and Porter County United Way agencies. Martie has been a Rotarian for 18 years and is a member of the Munster Rotary Club. She serves on their Board and was club president during 2010-2011. She currently chairs the club's program committee and organizes, with the high school, the club's Rotary Youth Leadership Conference and World Affairs Conference - two programs promoting leadership in youth. She has also served on the Board of Indiana Youth Institute, a statewide organization that supports the efforts of youth workers. She continues to serve on their Fund Development and Marketing Committee.

In June 2006, Martie was appointed by Governor Daniels to the State Board of Trustees for the Northwest Region of Ivy Tech Community College of Indiana. She served three years on this Board and served as Board secretary during the 2007-2008 term. In 2005 and again in 2007, she was chosen by Senator Richard Lugar to participate in the US Senate Hispanic Leadership Summit in Washington DC as part of the Indiana delegation.

Her greatest accomplishment? She is the mother of four children and is enjoying her role as grandmother of five.